Horrie and two rust art soldiers have made Campbell their home, taking pride of place near the flag poles, after a successful grant submission to Veteran Affairs under the Saluting Their Service Commemorations program.

Horrie, an Egyptian terrier dog mascot of the Australian 2/1st Machine Gun Battalion became a canine hero of the Libyan, Greece and Crete campaigns in World War II. He was found by Private Jim Moody in the Western Desert in North Africa one day in 1941. Horrie’s biggest asset was his vital lifesaving ability to alert the men to approaching planes before anyone else could see or hear them. He was even able to determine if the incoming aircraft were German.

Purple poppies are those that demonstrate our tribute to all animals that provided loyal assistance, raised the spirit and morale and brought joy into the service people’s lives. 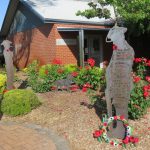 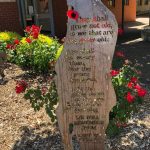 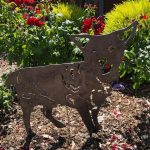 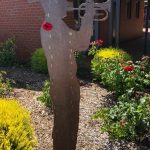